Before Letting Go, Allow Yourself to Feel

But the first step of letting go is... allowing

I don't know about you, but I've been on an emotional rollercoaster for the last two months!

This see-sawing between depression and feeling creative has been unnerving and extremely uncomfortable. I never know what mood I'm going to be in when I wake up!

And sometimes I've tried to push positivity on myself, when all I wanted to do is crawl back into bed and binge on movies and series to escape my own feelings!

It doesn't help when people around me try to make me watch positive videos or do group meditations on social media.

I know all they're trying to do is to help me, but I also think they're feeling uncomfortable!

Without allowing, there's no letting go!

Positivity pushers are people who always feel the need to feel positive and to make you feel positive too. They consciously or unconsciously want you to push aside your feelings, put on a brave face or fake it until you make it!

These are people who always need to see the positive side of a situation.

So you can imagine that trying to do that to myself and even to my followers made me want to puke! I sometimes made myself noxious!

But why would I do that?

Because, there's still a part of me that thinks that feeling a certain way makes me look weak.

My mother used to say that when I got angry it was a sign of weakness!

Or it makes me look un-evolved spiritually. That's a big one! especially as a coach, and mentor. Sometimes, I still feel like I have to always look zen and altogether!

But pretending is not letting go...

It takes a lot of effort to pretend to feel something you don't feel and at the end you're still struggling with your feelings!

Many years ago, I was introduced to a practice that changed my life!

This practice is called the Release Method and it's also known as the Sedona Method.

This method of letting go of negative emotions and beliefs enhanced my spiritual practice a thousand volts!

What made this method so revolutionary?

It introduced the concept that before letting go, we have to allow ourselves to feel what we're feeling.

Some of you right now might be thinking: Say what??!! Of course I feel angry, or sad, or frustrated.

I got you there, didn't I? Because who doesn't stress eat!

But are you able to let go after expressing or suppressing?

Why can't we feel what we're feeling?

Well, mainly that's because of our conditioning or in the language of the Release Method, our programming.

We learn to do what we see other people around us do!

I say we learn, because as children, we knew instinctively how to let go.

I'm sure you've seen 5 year olds getting upset with each other and the next minute they're playing together as if nothing happened.

Or you've seen your kid fall, cry for a bit, look around and if no one was paying attention, get up and move on.

But today, you can't move on so easily.

I was told that good girls don't get angry!

And little by little I started to learn to hate myself because I had no control over my anger.

Any time I felt something wasn't right and I or someone else (like a friend, a defenseless animal and even a tree) was treated unfairly or was hurt, I would get angry!

And the more I tried to push my anger down, the angrier I got!

So you can imagine what a relief I felt when after 40 plus years of being on this planet, I learned that I could allow myself to feel what I was feeling!

The art and science of allowing

I know what you must be thinking... so if allowing is neither expressing nor suppressing, then what is it? And how does it help us let go?

There's an art and a science to allowing yourself to feel what you're feeling. Meaning, there's a method and it happens with practice.

First, you have to make a conscious decision

So it isn't just about telling yourself, okay I'm feeling angry.

You want to mindfully feel what you're feeling, without going into the background story. You want to consciously notice how that feels in your body.

What will happen is that you'll feel that the emotion is like a wave, it ebbs and it flows. It's energy moving. And you'll also feel that what started as anger becomes sadness. Underneath it, there's sadness. Behind that sadness is the fear of not being heard, loved or accepted.

Basically, you'll get in touch with what you're really feeling!

Second, you have to drop the self-judgement

You'll notice you have a lot of judgement about how you feel.

You feel upset, but somewhere in your head, you might be angry at yourself for feeling upset.

Third, you have to develop the attitude of the witness

You are not your emotion, whatever you're feeling is happening on/in you like the pen in your hand or the waves on the ocean.

These three things have to happen when you allow yourself to feel what you're feeling.

As a result, you can let go

At least of one layer... because we're emotionally complex, multi-layered beings.

But in this moment, as a result of allowing yourself to feel what you're feeling, you can experience the space and the lightness that happens when we're able to let go.

And when you can't let go? It's perfectly fine. Continue to allow yourself to feel what you're feeling.

You can even allow yourself to hold on and/or to express! The difference is the awareness that you're bringing in.

Because with awareness there's perspective and with perspective, there's freedom.

and if you can't remember any of that! then, remember to be compassionate towards yourself.

For more information on the Release Method, read my blog: Mindfulness in 3 Questions

Have a questions? Ask here!

Laure Carter is an Ayurvedic Diet and Lifestyle Coach, an Ayurvedic Plant Based Chef and a Level 1 Release Method Coach 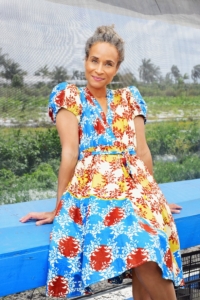