My Dad, My African American History

Throughout the month of February we’re honoring the African American personalities who made a significant impact and contributed to the history of this country; Dr. Martin Luther King, Rosa Parks and so many more.

And while we celebrate the well-known African Americans, I’m remembering one not so known but who made an impact on his students, his friends, and me, his daughter, my dad, my African American history.

This month is the anniversary of my his passing…

I didn’t know my dad well, I didn’t get to spend enough time with him. But what I know of him has touched me and transformed my life and others’ life in so many ways.

My dad was the first African American teacher at Miami Dade Community College.

And it wasn’t easy! He taught Languages and Literature.

He went to the army so he could go to college under the GI bill. Stationed in Kyoto, he had a Japanese girlfriend. They used to meet secretly. He learned to speak Japanese fluently. I don’t know if he developed his love and gift for languages at that time.

My half-brother Robin says that dad loved people and he wanted to be able to talk to everyone.

He went on to study Spanish, French, German and Haitian creole which he could all speak fluently.

I asked him once, ” Papa what’s your secret? How are you able to speak so many languages?”

He answered, with a twinkle in his eyes ,”The best way to learn a language is in bed.” Hahaha, yep that’s my dad.

When he retired, he created an incredible language program that would have helped people to carry a conversation in French, English and Spanish very easily with each other. But it never saw the light of the day, because he left us too quickly.

Once, he came to visit me in Paris, we went to jazz clubs, drank mojitos and philosophized about the world. That’s how I knew that even though I hadn’t spent a lot of time with him I was my father’s daughter and he was my tie to African American history.

I’m a descendant of the South Carolina African Americans.

Recently I did a DNA test to know a little more about my father’s heritage.

They met at the university of Strasbourg where my father was working on his PhD. How these two drastically different people got together is a story in and of itself. There’s definitely a Higher Intelligence at play in our lives. 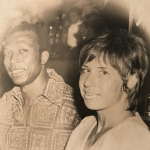 And though I know a lot about my Alsatian heritage, I knew close to nothing about the African American heritage my father gave me.

Only recently I learned that my father had been adopted. He was raised by my aunt Sadie.

The DNA site (AncestryDNA) taught me about the South Carolina African Americans.

In South Carolina blacks outnumbered whites by almost 2 to 1. Most were enslaved and working on rice or indigo plantations, though almost 10,000 free people of color called the state home as well.

When I first came back to the United States as a teenager, I used to have nightmares.

I dreamt that I was chained. When I woke up my wrists hurt so bad.

This experience taught me about the collective unconscious, how we carry in our subconscious the stories of our ancestors. I don’t know that we’re ever free from these stories.

I consider myself a spiritual practitioner. What I mean by that is that I cultivate compassion and respect for all human beings. But the truth is that this part of my collective African American history can be triggered. Deep seated emotions can come up to the surface. I can feel so much suffering and anger sometimes that I feel like my heart is going to stop.

My father’s people are the Gullah Geechee people

What the DNA website didn’t tell me about is the Gullah and Geechee people who lived (many of their descendants still do) on the islands along the coast of Georgia and South Carolina.

Interestingly, the Geechee Gullah language – a blend of English and African languages, was born on Africa’s slave coast and developed in the slave communities of isolated plantations in the coastal South

According to the Cultural Heritage Commission, that language is the only distinctly African creole language in the United States and has influenced traditional Southern vocabulary and speech patterns.

So I am creole after all.

After the Civil War — when the rice and cotton plantations were burned down — the owners fled to the mainland and freed slaves stayed behind.

In the 1900s African Americans started to leave the south. Between 1925 and 1950 migrants from the Deep South followed the railways due north to Chicago, Detroit, and other Midwestern cities to work in the automotive, steel, meatpacking, and manufacturing industries.

African Americans from the Carolinas’ mainland flocked to northeastern cities like Philadelphia and New York City in what contemporary observers called the “Black Exodus North.”

But the Gullah Geechee people including my paternal grandmother’s family continued to live in isolation. They maintained their unique culture and traditions.

I don’t know when my father’s family moved to Florida. But I can only imagine what life must have been like for a young, intelligent black man in the South, hungry for knowledge and connection.

He never talked about this part of his life.

South Carolina African Americans were brought from Ghana, Ivory Coast, Benin, Cameroon and Togo. In 1989 and 1990, my dad traveled throughout this region. When he came back, he looked so happy, at peace. He couldn’t wait to go back.

My dad brought me back to the country of my birth.

In 1998, my dad knew he was dying. And so he came to see me in Paris. During one of our conversations he said to me, “Laure, you’re never going to be able to grow to your potential staying in France, you have to come back to the U.S.”

So I came back.

And then he died. It felt like I lost him all over again.

Now I can see all the beautiful ways that my father impacts my life and others’.

Today, I’m here doing what I love, helping people be free… of physical symptoms and emotional pain. And they don’t know it but that’s all because of my dad!

And when my sister and her then boyfriend opened their first yoga studio in Martinique after they spent time here and I introduced them to yoga I could hear my dad laugh… Every time one of my clients share with me how good they feel, how their lives have changed for the better, I can hear my dad laugh…

I can feel his joy…

And so perhaps we should take this into account when we don’t understand them, before judging them.

It also makes me think how connected we are to the past, present and future and to everyone, everywhere.

“All of us labor in webs spun long before we were born.” William Faulkner

We are exactly as we should be and all that we are has value.

And when we celebrate or remember people, the part of them that never dies celebrates with us.

Who is your African American history?